Brian Cozine stands at attention in full dress blues before a small crowd of his family, friends and cadre on a recent October afternoon. Students passing by the University of Georgia Army ROTC plaza on Sanford Drive on their way to class are unaware of the significance of the ceremony. It’s an important day for Cozine, not only because he is being commissioned as a lieutenant colonel by his former commanding officer Col. Kimberly Daub, marking his formal arrival as head of UGA’s ROTC Bulldog Battalion. The event is profoundly significant because of the road he traveled to get here.

Lt. Col. Brian Cozine is an organizer, and he’s good at it. He can devise a complex plan with layers of intricate details and logistics. Described as the “Jedi knight of planning” by Col. Daub, his job has taken him to the four corners of the world, away from his family and friends, and any sense of normal routine. But the one constant through the years is his love and loyalty for his country. His compassion for humanity and his need to help others repeatedly pulled him thousands of miles away from home. After being out of the country on multiple deployments for the last 25 years, Cozine is back on domestic soil to share his knowledge and expertise with the next generation of officers as commander of the University of Georgia Army ROTC Bulldog Battalion.

The Springfield, Vt., native emerged from what might be considered meager beginnings. He was a scrawny kid, the product of divorced parents without the means to fund an education beyond high school. There were no career goals and no expectations of success. Armed with ambition to make it on his own and strive for a better life and a future for himself, he enlisted in the army right after graduation in 1990, a decision that set him on a life-changing course and impacted his perspective of the world in ways he never expected.

Cozine spent the first six-and-a-half years of his military career as an enlisted serviceman, earning an education of a well-traveled soldier. By the time he met his wife Stacey in the late 90s, he began thinking about the future, about how to support a wife and family. While stationed at Ft. Campbell, Ky., he enrolled in the Army ROTC program at the University of Tampa (Fla.), and in 1999 he received a bachelor of science degree in computer information systems. He then went on to earn two master’s degrees—an operational arts and sciences degree and a philosophy of military strategy—from the Air Force University at Maxwell Air Force Base in Montgomery, Ala. He learned about international relations and theory to understand strategies of military decisions and Internet warfare. He developed critical thinking skills necessary to take national policy from the president and Joint Chiefs of Staff and incorporate it into military strategy, skills that would benefit U.S. involvement in world crises.

The missions that Cozine has led over the years involve providing supplies and logistical support for war and humanitarian efforts. During a seven-month deployment to Afghanistan in 2013-14, his job was to organize and manage the sustainment of fuel, food and water for the military training of Afghanistan forces in the fight against terrorism. He shaped the organization of the missions he conducted into a masterful routine. That’s why after being back home at Fort Campbell, Ky., for only five months that Cozine got the order from Col. Daub to help with what proved to be one of the most important missions of his career.

On September 16, 2014, Cozine once again packed his bags and left his wife and two young sons to travel to the other side of the world. Liberia, Africa, was at the center of a global health crisis in the world’s largest and deadliest Ebola virus outbreak ever recorded. Cozine’s mission was to help organize troops and supplies on the ground in preparation for the arrival of international agencies, such as the World Health Organization and Samaritan’s Purse, to help get the deadly disease under control.

By the time Cozine and the initial team of 30-40 soldiers from the 101st Sustainment Brigade landed in the capitol of Monrovia, three U.S. healthcare workers had returned to America for Ebola treatment, and the one American civilian who eventually died of the virus in Dallas, Tex., was in flight to the U.S. The scare of contamination was pandemic in the U.S., but it paled in comparison to the helpless feeling of the African nation. Liberia had experienced 13 years of civil war prior to the Ebola outbreak, so the epidemic just compounded the problems of an impoverished nation.

Their arrival into Monrovia was was marked by conflicting messages from both the traditional tribal culture and the modern culture, which created confusion about how to combat the disease ridden country.

“There was a huge PR awareness campaign for Ebola. There were radio jingles about the disease, which were really clever, and then in the next minute there was commentary contradicting the radio ads about the severity of the disease,” said Cozine.

Their mission was to help eradicate Ebola by educating and training Liberians to be self-sufficient, building treatment teams, and training healthcare workers with the U.S. Public Health Service to protect themselves and prevent the spread of the virus. They were initially housed in an apartment complex next to the U.S. Embassy in Monrovia, overlooking the Atlantic Ocean. Their view was symbolic of the split culture.

“You had a beautiful view of the ocean in the distance, but close to the building, on the street, you could see the refuse and human waste and the people who were leaving it.”

They set up operation headquarters in the Firestone office building, the only American corporation that stayed during Ebola. After a 21-day quarantine, the team moved south of Monrovia.

“Ebola has a gestation period of 21 days, so entire villages could be wiped out in a month. It changed the mindset of everyone there,” said Cozine.

The Liberian Speaker of the House of Representatives Alex Tyler expressed gratitude on behalf of his country for the arrival of U.S. troops. “A few months ago, we had people coming down with the deadly Ebola virus in our county, and we had no place to take our suffering people. You have given us hope...”

The rest of the Col. Daub’s Sustainment Brigade from Ft. Campbell, Ky., arrived, and 700 men and women began to lay the groundwork for building 10 Ebola treatment centers designed for healthcare workers to treat infected civilians and one Monrovia Medical Unit designed to provide aid to any sick or infected aid workers. They set up an air pad and established air and land transportation, which allowed them to transport more than 3,850 tons of cargo, equipment and critical supplies over 16,000 miles.

In five short months the brigade moved 1.2 million pieces of personal protective equipment, provided 500 tons of food and over 60,000 cases of water. They procured, stored, and distributed over 1.1 million gallons of fuel, produced 325,000 gallons of drinking water from the Atlantic Ocean that was used for cooking and cleaning, and procured and issued more than $12.4 million in parts used for maintaining equipment.

Donned in Tyvec suits, they provided training and support to 3,000 military and civilians, including U.S. Army and Navy doctors, the people of Liberia and the World Health Organization personnel. The new equipment allowed the healthcare workers to receive test results in three hours, rather than the prior three-week waiting period.

The mission also generated economic development by establishing a $6 million contract to train and hire drivers. They processed and funded 20 contracts used to assist in life support activities for $11.5 million, while the rest of the Task Force processed and funded $337 million. They established mail service for the area, processing over 260,000 pounds of mail.

By February 2015 there were only 50 of the brigade remaining in the Liberia. They travelled back to the states and were quarantined in Texas through March before going back to Fort Campbell. That’s when Cozine got the news of his new assignment: heading up the Army ROTC unit at the University of Georgia. While it is a new opportunity in a field he had not yet experienced, he has taken on the job with the same enthusiasm and planning as the last 25 years of his career.

“The Liberian mission was humanitarian. I am always thinking about what I can do differently. I learned so much that I thought I’d never do. People see the Army in a different light after this mission. There’s a flag on the right shoulder of our uniform—it means something, especially when you’re bringing hope for a better life. Helping someone to do something they couldn’t do on their own is bringing that hope—it’s about saving humanity.”

Cozine continues this mission at UGA, to teach the cadets to make a better life for themselves and for others.

“We’re trying to teach cadets to be able to think outside the box. They need to work as a team to come up with a solution based on the information and resources they’re given.”

This is very much how his entrance into the Army began. He took what he was given with his life and developed a plan and strategy based on the resources that were available. What an incredible life lesson he has to pass on to his cadets. 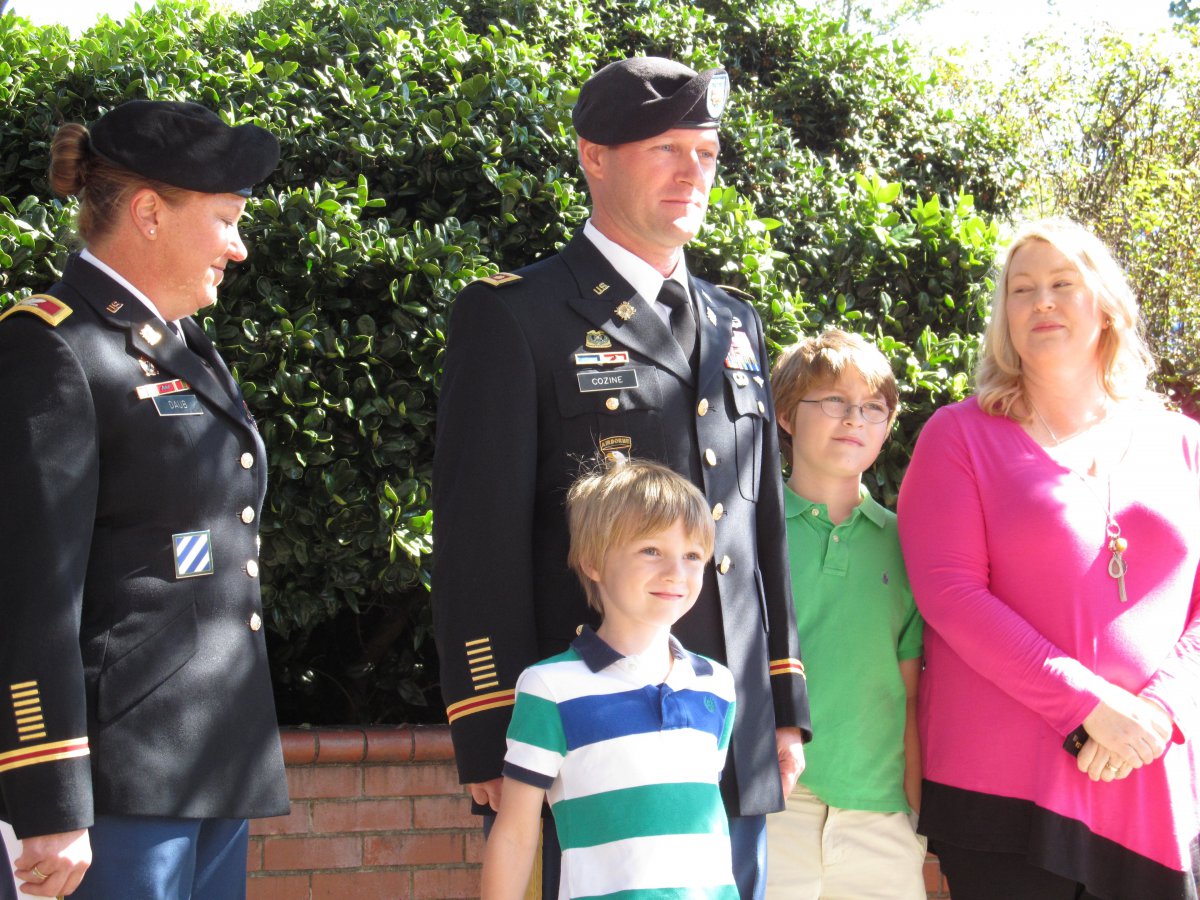 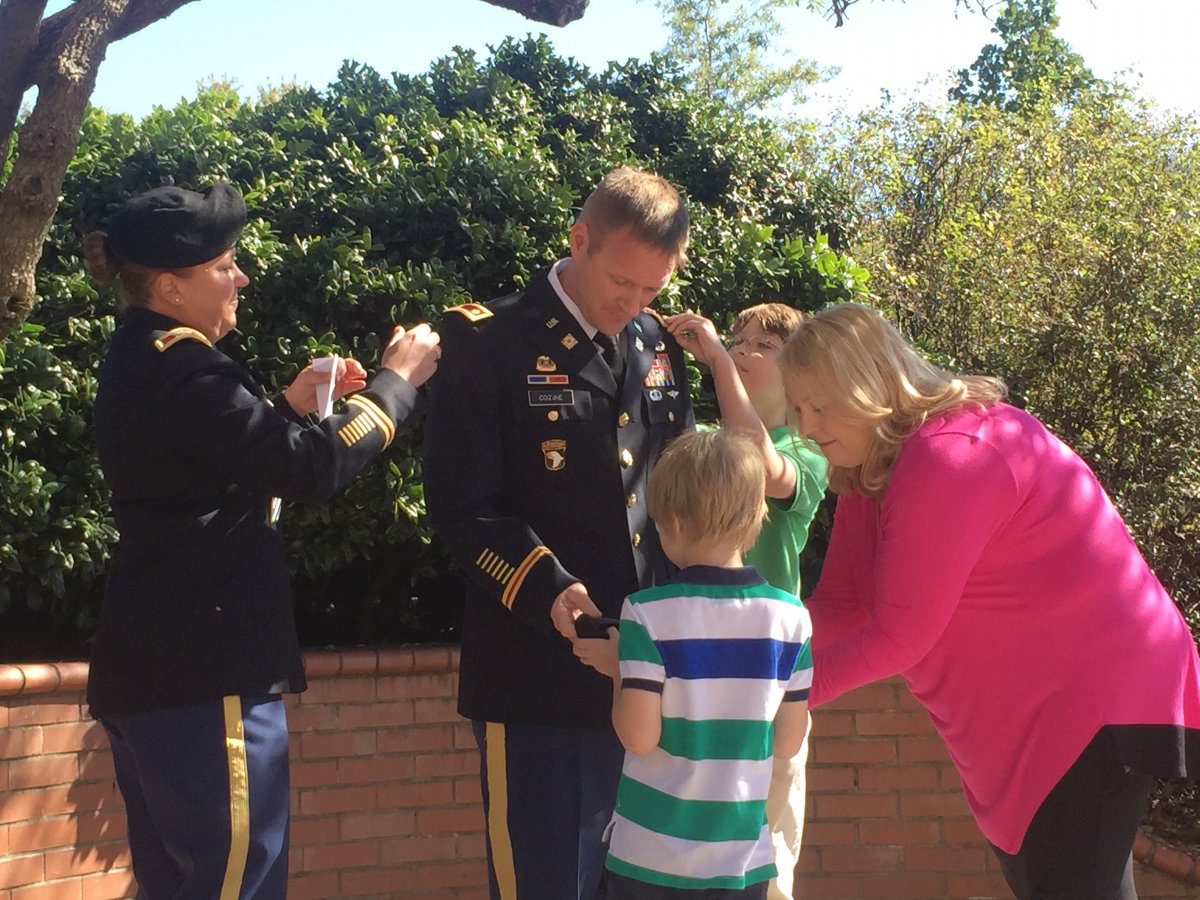